When discussing social media, It’s difficult to mention Facebook without adding Twitter. This is because the two channels seem to be the biggest of all social media platforms.

All day, every day, with expletives mumbled every hour or so, I see companies that just don’t get it on Social Media. I can excuse people for not doing it properly, because they don’t usually have a brand to uphold. But companies…they’re doing more damage than good to their brands. 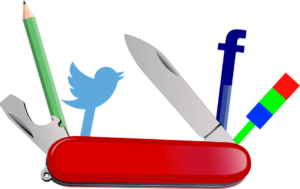 Facebook is like a reunion. For the most part, your friends on Facebook are family members, people from your hometown, other comedians/entertainers, etc. You may not have met them in real life, but because of the connection to other people you know, and the interaction, you pretty much already know them.

With photos, you get even more engagement. Photos are one of the BEST ways to get attention for a profile or business Page. You add people as friends because of mutual connections. You may have met at a BBQ or pool party. Now you WANT to connect.

Twitter is a party that your neighbor’s brother-in-law’s mother is having. You won’t know ANYONE when you get there.

How are you going to get through it? Easy. You start jumping in on conversations and learning about others, so you make friends. Talk about what THEY are talking about and, eventually, they will ask about YOU.

If you walk into a party, and you’re just blurting out and talking about how your used cars are the best in the world, NOBODY is going to like you. In other words, on Twitter, they won’t follow you back.

Much like having a glass of wine in one hand, and a small plate of food in the other, it’s kind of hard to dig for your wallet to show pictures of your kids. Pictures aren’t as important as a conversation on Twitter. That’s OPPOSITE of Facebook.

Twitter is a little like dating for shy people. You see a cute guy across the room, so you say hi or do something to catch his eye. Now, you could give a slight wave (like a follow!) or, walk up to him and be aggressive enough to scare him off. Don’t grab his junk right off the bat! Give a little wave, he will probably wave back, which is equivalent to a follower.

Then you start a conversation. Get to know him. His friends may walk over and start talking to you. You start getting to know people. You begin gaining followers. In your first conversation, you’re not going to say “HEY! I’M A PLASTIC SURGEON” to get attention. That’s like an auto DM. People will probably walk away from you. Or unfollow you.